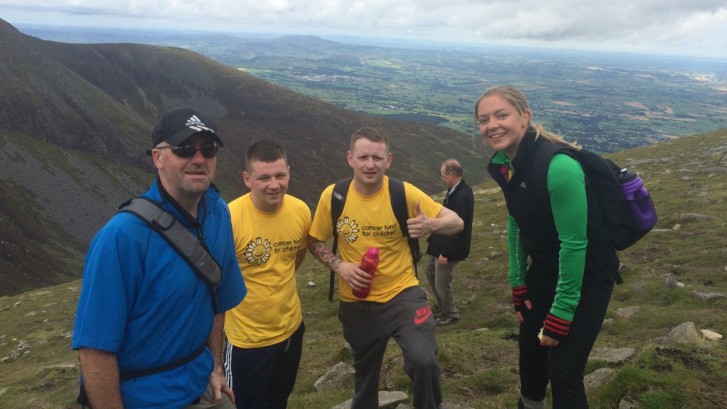 A team of seven SAM employees got together on Sunday 30th August to take part in the Cancer Fund for Children’s flagship challenge event to climb the beautiful Slieve Donard mountain, Northern Ireland’s highest peak.

“Gerard and I arrived at Donard Car Park shortly after 8:30am and made our way over to Hugh McCann’s bar where registration was taking place. The Cancer Fund for Children staff were very thorough, giving us plenty of detail about the route and checking we had all the correct safety gear. We sat down outside with a cup of tea while we waited on the rest of our team, however, the wasps seemed to be attracted to the bright yellow Cancer Fund for Children t-shirt I was wearing and after a few ninja moves trying to avoid them I gave up and went inside. Unfortunately, the rest of our team were having their own battles on the way to Newcastle having taken a wrong turn somewhere and ending up heading Bangor direction, which set them back about half an hour or so. Mark had also brought his Jack Russell with him but poor wee Sonny didn’t travel well and ended up being sick all over Jacqui – lovely!

“Gerard and I were advised to start the walk with the main group and the others said they would catch up so we followed the guide, starting our trek at 9:40am. The first part of the hike through Donard Wood along the Glen River was fairly tough with plenty of tree trunk obstacles, uneven ground and marshy areas. It reminded me a little of one of those Bog Run obstacle courses. We reached the first marshal point and had considered waiting for the rest of the team there, however, the wasps were back with a vengeance and I wasn’t hanging around to see what they would do!
“Exiting the wood you catch a glimpse of the climb that is ahead of you. Luckily, the next part of the hike is a bit easier with a more gradual incline. Lots of people were stopping for photos at this point and there was a great buzz around the place. It was lovely to see all the yellow dots at different stages of the climb too. The next part of the hike towards the saddle started to get tough again, with plenty of steps to make our calf and quad muscles burn. We were also attacked by swarms of midges but nothing dampened the mood or our determination to complete as we all remembered the reason we were doing the hike.

“The final part of the climb along the Mourne wall to the summit was amusing. It required numerous stops to catch our breath and allowed us to have joke with other climbers as they passed us, only to overtaken by us a few minutes later when they were on their break. It was a great feeling when we saw the little stone shelter at the top of the mountain and with clear skies, the views were spectacular – we could see across to Scotland! We had a quick bite to eat and started our descent fairly quickly as the temperature dropped quite considerably and I was thankful the Cancer Fund for Children had suggested to bring a hat and gloves!

“On the way back down we bumped into the other SAM team members on their ascent up Slieve Donard, all full of energy and smiling (even Sonny the dog!). We took a few photos and wished them luck on their final hurdle. We practically ran the rest of the way.

“Gerard and I arrived back to Donard Car Park three hours and fifty minutes after leaving it. We were greeted by the friendly staff from the Cancer Fund for Children and issued with a certificate and ticket for a free food. We rested our weary feet in Hugh McCanns with some juice and a burger and had a giggle about our experience up the mountain before making the journey back home.
“On behalf of SAM I would like to say a huge thank you to the Cancer Fund for Children for organising such a fantastic and memorable event. I would recommend it to anyone, no matter what your fitness level is. You can climb the mountain at your own speed and there are plenty of volunteers and guides on hand to help out and offer encouragement. We were delighted that we could make some contribution to this amazing charity.”