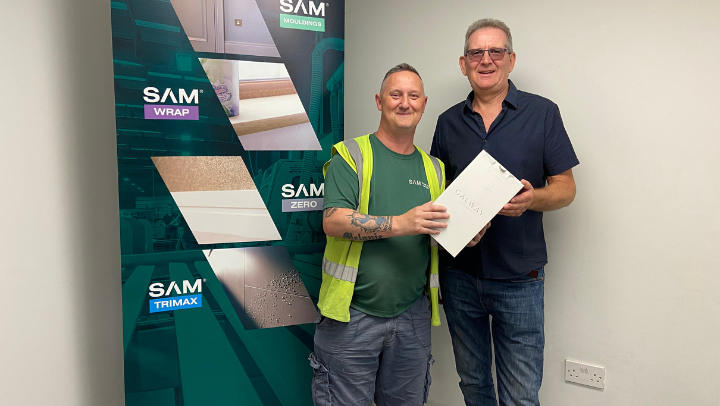 It’s the year 1992.  The UK is coming out of a recession, Liverpool wins the FA Cup for the 5th time, Linda Martin wins the Eurovision Song Contest for Ireland with Why Me? and Great Britain and Northern Ireland compete at the Olympics in Barcelona winning 5 gold, 3 silver and 12 bronze medals. In a County Antrim town, on the northeast shore of Lough Neagh, a young Darren Gill, affectionately known as Darno amongst family and friends, joined a start-up MDF mouldings manufacturer to earn some money to fund his social life.

“There were only 4 or 5 of us working in the factory at the time, along with a scheduler and of course the owners Sam and Julienne,” Darren remembers. “You wouldn’t believe what it was like.  We used to manually push boards through the rip saw, then run them through a small spindle moulder before moving them to the paint area, which felt like a big oven. Again, everything was manual, so we put the moulded boards through the paint machine, carried them over to a rack to dry for 20 minutes and then ran them through again.  If we managed to manufacture one load in a week it was considered good.”

Darren recalls, “It was very different back then. We were all young, there was very little in the way of health and safety, and we worked as much overtime as we could to pay for our nights out.”

It wasn’t long after this that Darren met his now wife Melanie and he remembers when SAM moved to a bigger premises because it was around the same time as the newlyweds bought their house. “The company grew quickly and when we moved to the new factory there were about 20-30 people working.” Darren settled down and started a family and the proximity of the SAM factory to his home worked well during that time. “The years have just flown by. My kids are all grown up now. It’s hard to believe I have been here for 30 years.”

When asked how working at SAM compares now with those early days, Darren gives a cheeky smile, “Well, I’ve grown up a lot.  I used to be a bit of a jack the lad.  I’m more sensible now, but I still have a laugh.”  He continues, “The working conditions are better now, especially health and safety, the bonuses are great and there are a lot more staff.”

Darren was thanked for all his hard work over the years and presented with his award by SAM CEO, Sam McCrea during the most recent company quarterly update.

Sam McCrea CEO, comments, “Congratulations Darno on reaching 30 years, it has been a great pleasure working with you. You are a real asset to SAM and I hope you will be with the company for many more years.”

A huge congratulations to Darren for reaching this fantastic and very impressive milestone!