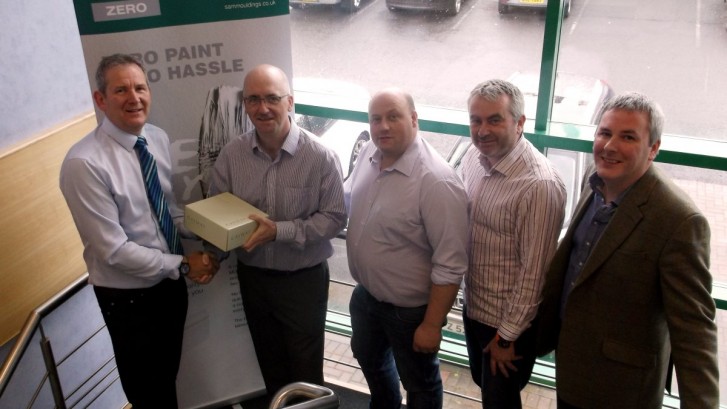 SAM employees have been presented with vouchers and a crystal bowl to mark celebrate their long service with the company.

SAM has recently handed two 20 year service awards to two of the Company Directors.  Sales Director Gerard Wilson and Technical Director Mark Kirkpatrick have both reached the milestone.  We chatted to Gerard to see how he came to work for SAM.  Gerard started working at SAM in May 1995 as a Business Development Manager to start growing business opportunities in Great Britain.  MDF at that stage was a growing market and the product was being well received.  SAM listened to what customers’ wanted rather than trying to manufacture what was easy, and so the product and service aspect was well received by new customers.  Gerard was offered external training through Invest NI to help with the transfer from education to the business world and was assigned a mentor within SAM.    As the business grew and became established in the UK market, volumes increased and partnerships were formed with the leading builders’ merchants, which provided a need for a Key Accounts Manager – a role Gerard was happy to deliver.  After a number of years Gerard was promoted to Sales Manager and as the team expanded, he bought into the SAM and became Sales Director.

Gerard commented, “I was lucky to come straight from education into an innovative and ambitious company where I was able to grow and develop both professionally and personally over the last 20 years to be where I am now – Sales Director for a market leader within the construction industry.”