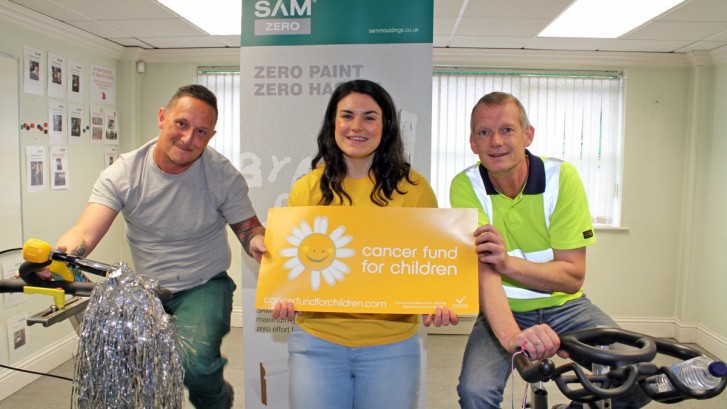 Pedal power has helped Antrim based company SAM get off to a flying start and raise an extraordinary £2,500 of its overall £10,000 target for its chosen charity partner – Cancer Fund for Children. Proceeds will go directly to the organisation dedicated to ensuring children, young people and families don’t have to face a cancer journey alone.

The 25-hour endurance cycle was held at the SAM offices in Antrim with the event kicking off between 8am on Thursday 30th July and running throughout the night to 9am on Friday 31st July. Eighty workers from the company joined forces to raise the vital funds as well as celebrating the company’s 25th anniversary.

The team took it in turns to keep the momentum up on a couple of spin bikes donated by the Antrim Forum and Ignite Studios for the event. Each employee cycled for at least 10 minutes with some cycling up to an hour at a time throughout the night.

The event grabbed the attention of the Mayor of Antrim and Newtownabbey, Councillor Thomas Hogg, who stopped by and also took part. Newly elected MLA, Danny Kinnahan and Councillor Trevor Beattie also attended and showed their support.

SAM has set a fundraising target of £10,000 for the one-year partnership with the Cancer Fund for Children and now hopes to exceed that after the success of the first event.  The partnership aims to create team building opportunities for SAM employees as well as raise money for a fantastic cause.

Richard Holmes, Managing Director of SAM, said: “We have always donated money to local charities, however, this year we decided to announce a charity partner and organise various fundraising activities throughout the year, which staff, customers and suppliers could all get involved in.

“The 25-hour cycle was our launch event and I was delighted to see so many of our staff volunteer to take part in the activity to raise vital funds for such a worthy charity. There was a great buzz around the business and all employees did themselves and the company proud.  I’m looking forward to the next event already!”

Sorcha Chipperfield, Corporate Fundraiser at Cancer Fund for Children, said: “Congratulations, SAM for organising such a brilliant launch event!  You’ve set the bar really high for future fundraising events. Thank you so much for your dedication to the charity.  The money will provide much needed support to children and young people diagnosed with cancer, as well as to their families.”

Cancer Fund for Children’s CEO Gillian Creevy said: “By taking part in the 25-hour cycle SAM’s support will be helping families affected by cancer get through the toughest time of their lives. Every week in Northern Ireland another three children, teenagers and young adults are diagnosed with cancer. We rely on donations, goodwill from the public and corporate support. Funds raised will enable our team of experienced specialists to help even more families cope with the impact cancer has on their lives supporting them during and after treatment and sadly in some cases, bereavement. We can’t thank SAM and its employees enough.”

To view all the photographs from the event please visit the SAM Facebook page www.facebook.com/SAMMouldings